Pregnancy Benefits of Pears: Why They’re Good For You 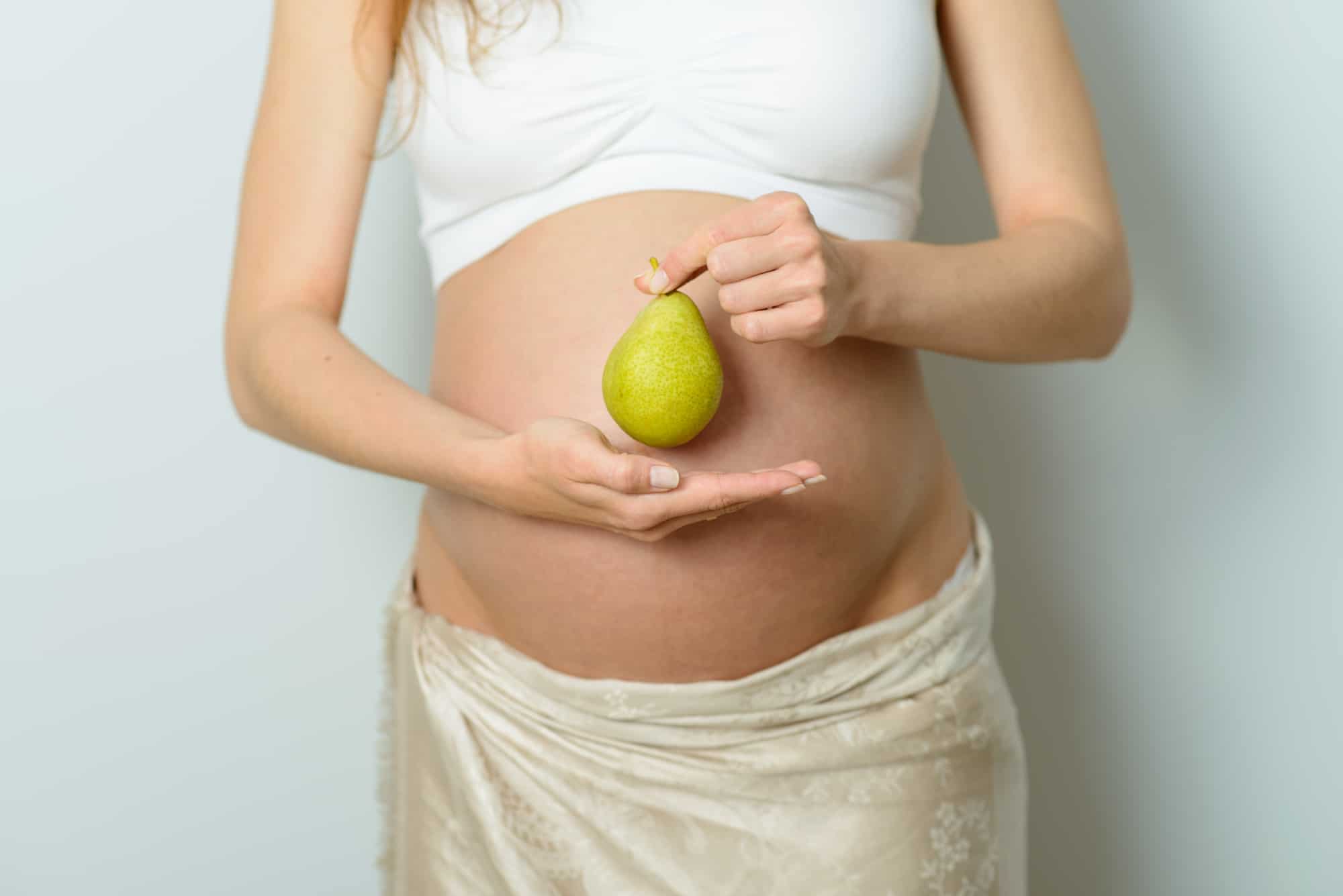 Pears have many nutritional benefits and are an excellent snack during pregnancy.

Pears have several benefits for pregnant women and can help with some common pregnancy complaints. Nutrients found in pears can be good for your health as well as that of your unborn baby.

You can enjoy pears in sweet and savory dishes, cooked and raw. Raw pears require some precautions, however, and we’ll look at them here.

There are some types of pears that are better than others for you – so we’ll break down the differences so you can choose the best pears for pregnancy!

Why Pears Are Good For You: Pregnancy Benefits

Pears are a great choice of fruit during pregnancy.

One of the top benefits of pears in pregnancy is that pears are rich in dietary fiber, especially if you eat the skin, with one pear providing 22% of the daily value for only 101 calories.

Pears are also a good source of vitamins A and C, and they contain traces of calcium and iron (Source: Nutritionix).

Vitamin A is important during pregnancy since deficiencies can result in adverse effects in the fetus, including congenital malformations (Source: MDPI).

Vitamin C is equally essential, as deficiencies could cause fetal brain damage. Vitamin C deficiency can happen more frequently in pregnant women and in those people with type 1 diabetes (Source: PMC).

Calcium is another important nutrient for building strong bones. In addition, one study found that pregnant women consuming low amounts of calcium – under 900 mg per day – could reduce risks of preeclampsia by up to 65% by consuming an extra 1000 mg per day (Source: JOGI).

Pears also contain antioxidants including phenolics which are particularly potent in preventing the oxidative effects associated with cancer and other diseases.

In China, pears have been used as a folk remedy for more than 2000 years as anti-inflammatory, diuretics and antihyperglycemics. Many people use pears as remedies for coughs (Source: NutritionToday).

If antioxidants are important to you, you’ll want to know that out of all varieties of pears, Comice pears have been found to have the highest total phenolic contents.

What’s more, pears are more shelf-stable than other fruits and are therefore easier to store for longer periods of time (Source: NutritionToday).

Pear consumption – eating the whole fruit as opposed to drinking the juice – has also been linked to a lower risk of type 2 diabetes and a lower incidence of strokes, as well as overall improvement in gut health (Source: NutritionToday).

One pear also provides you with approximately 12 mg of folic acid. Folic acid is particularly important in the first trimester of pregnancy as it is key for avoiding neural tube defects (Source: CDC).

Pear Juice is safe to drink during pregnancy if it’s pasteurized, but bear in mind that pressed or juiced pears won’t contain the beneficial fiber content, so it’s better to eat them whole to get their full benefits.

Constipation is a frequent complaint in pregnancy, particularly from the second or third month onwards as the uterus grows.

The good news is that pears can help!

Pears are concentrated in fructose, and the fructose combined with the high fiber content is what is believed to give pears their laxative properties.

The fiber in pears is 71% insoluble fiber and 29% soluble fiber. Soluble fiber dissolves in water and is broken down in the colon into a gel-like substance which is gentle on the digestive tract.

Insoluble fiber is left intact as the food moves through the digestive tract and it is this type of fiber that helps prevent constipation (Source: UCSF).

Are All Types of Pear Fruits Safe in Pregnancy?

Amazingly, there are over 3000 types of pears, but the most common ones are Anjou (green or red), Bartlett, Bosc, Concorde, Comice, Seckel, Forelle, and Nellis.

Almost all pears that are commercially grown and sold in markets and supermarkets will be fine to eat in pregnancy.

What you’ll have to look out for are other foods that are called ‘pears’ but are actually different foods altogether.

Here are some examples:

Prickly pear, also called Cactus pear, is not a pear, but is rather a member of the cactus family.

You may also know it as nopal, because in Mexican dishes nopal is often eaten in salads or served on the side as a vegetable.

Prickly pears are best avoided in pregnancy as they can interfere with your blood clotting mechanism, and they are not considered safe to eat for children, while pregnant or while breastfeeding (Source: FCER).

Other Safe Types of “Pear” When Pregnant

There are a couple of other foods called ‘pears’ that are a little different, but still safe to eat when you’re pregnant:

Avocado pear – This is actually another name for the avocado, as it has a pear shape. Avocados are an excellent source of healthy fat and have many health benefits beneficial to pregnant women as well as the fetus during its development, such as folate, potassium, carotenoids and other key compounds (Source: NCBI).

There’s one main consideration when prepping pears during pregnancy, especially if you’re eating the fruit raw.

You should be sure to wash your pears before eating, as unwashed pears contain bacteria and parasites that could lead to diseases that are dangerous during pregnancy such as listeriosis and toxoplasmosis.

Remove any bruised or damaged areas from the pear before eating, as those are places where bacteria can multiply easily (Source: FDA).

If you want to get the maximum nutritional benefit from your pears, keep the skin on. Peeling pears can lead to a loss of more than 25% of their antioxidant and ascorbic acid content (Source: NutritionToday).

If you’re going to cook or poach pears, then give them a good wash before cooking, but be reassured that the heat will kill off any potentially harmful bacteria from the skin of the pear.

Can I Drink Pear Cider When Pregnant?

Pear cider, also called perry, is not suitable to drink while pregnant as it contains alcohol. This is different to non-alcoholic pear juice, which is safe if it’s pasteurized.

According to the World Health Organization, no amount of alcohol during pregnancy is considered safe and so pear cider is best avoided (Source: WHO).

Overall, pears are highly nutritious and should definitely be high on your list of foods to eat during pregnancy.

Just be sure to wash them before eating, and avoid any alcoholic pear drinks.